Richard Holdsworth has now made available his brochure which describes in detail the whole Holdsworth story. Click on the link below to download and view this:

Club members get a quarterly magazine, access to manuals for their Holdsworth model and the opportunity to meet with other Holdsworth owners or previous owners at a monthly meet-up between April and October to exchange tips and ideas or just have an informal social weekend at an interesting location. Membership is just £12 a year.

Any persons looking for a quality Holdsworth Motorhome please contact
Frank Mcinroy and he will give you details known to date.

Please use titles at top left of page to view other pages.

Richard Holdsworth began his conversion business in 1968. Richard and his wife Heather had been working in Australia for eight years prior to returning to England. He, and his wife Heather, decided that they would like a camper to explore the UK and the continent, but prices of new campers were prohibitive, so they bought a used V W Kombi van and converted it to their ideas while travelling thousands of miles. People were impressed with the conversion and Richard and Heather were frequently asked to build campers for others,so in 1968 eighteen V W campers were converted in a lockup garage at Clapham Common, London. Richard building the furniture and Heather carrying out the upholstery and trimming.

A company offering V W spares asked Richard to build furniture kits it could offer to customers to fit in vans themselves That moment became the start of Richard Holdsworth Conversions. At the same time the V W spares company offered Richard part of its factory at Ashford, Middlesex as the lockup garage by that time had become far too small.

Business over the next year increased so much that it was necessary for them to move once again, this time to Woodley, Berkshire, an ex-aerodrome hanger which became their new factory location in 1972

By this time Richard was offering six of his Holdsworth conversions. They consisted of a V W van conversion with fixed roof, a Commer Standard,Commer Super,Bedford C F, Ford Transit, and another V W , but this time with a rising roof.
The line-up of Richard Holdsworth models remained pretty much the same until 1977 ( with exception to some varied layouts on the V W ) when the Leyland Sherpa was added to his listing
The hierarchy at British Leyland were so impessed with the Sherpa Holdsworth that they gave the full company approval to the conversions.
From very humble beginnings in the 1960's Richard Holdsworth Conversions Ltd went on to produce some very memorable motorcaravans. Many of their panel van conversions based on the Commer, Bedford CF, Transit,and V W are still very popular choices on the used scene today. As time progressed the company released such models as the Holdsworth Vision and Villa based on the type 25 V W T3 and the Holdsworth Ranger, a coachbuild based on the Leyland Sherpa.

The one defining point about Holdsworth models over the years was that they often dared to be different in their use of internal layouts, at a time when many manufacturers used tried and trusted formulas.

The company continued to prosper during the 1980's but sadly ran into financial difficulties in the 1990's with the minibus side of the business ( a deal to supply several thousand minibus conversions collapsed, leaving the company with too much stock) The company eventually became Cockburn Holdsworth for a short time, but in the end ceased trading as a motor caravan converter. It was sad to see such a innovative company leave the ranks of the motorcaravan manufacturers. It had intoduced many great design ideas and acheived some memorable milestones, not least winning V W approval for its conversions

Richard is the Honary President of The Holdsworth Owners Club, and, as well as advising many present day motorhome manufacturers, he has now become a novelist and is at present working on his second book.
5 comments: 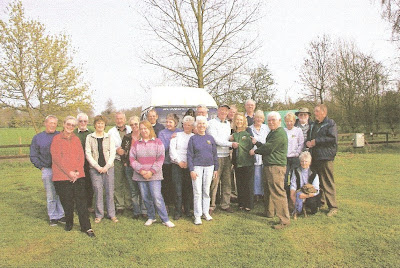 
The Holdsworth Owners Club welcomes owners of all Holdsworth motor caravans who wish to obtain the maximum enjoyment from their Holdsworth van.


Within the membership is a wealth of knowledge in running a van carrying the Holdworth badge; this includes the provision of Owners Manuals and access to suppliers who might be able to provide parts and information that can keep a Holdsworth van on the road.


An informative and friendly Newsletter is produced at regular intervals and a social calendar extends throughout the year thus enabling members to meet others and maximise the enjoyment from ownership of a Holdsworth van.
Cost of membership is minimal.... Full details and a Membership Aplication Form please refer to contact page.
Thank you for viewing our blog- Iain Mackinnon.

To bring you up to date... Richard and Heather Holdsworth now live in Austrailia where their children and grandchildren are.  They are constantly in touch with us here in Britain and take a great pride in the  Owners Club and the continued use of Holdsworth motorhomes.

Each member joining the club will receive a copy of The Holdsworth Journey which gives the history of Holdsworths from the beginning to the end with  lots of wonderful pictures. This is as long as we still have stock.